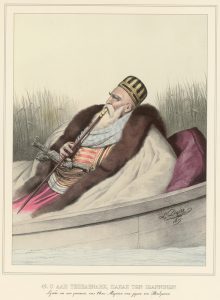 For 32 years (1788–1822), Ali Pasha ruled Epirus and most of Albania, Macedonia (up to Thessaloniki) and the Peloponnese (except Mani), Northern Euboea, Thessaly and Central Greece, as well as parts of Skopje (Monastiri, Ohrid). His political administration rested mainly on Greek officials, while his army comprised Greeks and Albanians.

The official language of his state was Greek, while many of the people who were destined to become the heroes of 1821 served in his court: Karaiskakis, Athanasios Diakos, Markos Botsaris, Ioannis Kolettis (the first parliamentary prime minister of independent Greece), Anthimos Gazis, Ignatios of Houngrovlachia, and others.

During his reign, Ioannina became an international commercial, economic and—above all—spiritual centre. England, Russia and Napoleon’s France were openly competing against each other in pursuit of an alliance with Ali.

In his old age, he entered into a Christian marriage with legendary Kyra-Vassiliki Kontaxi, who had absolute control over him. During his omnipotence, Ali built dozens of Christian churches but no mosques, whereas he declared Cosmas of Aetolia a saint! As part of his personal political aspirations and planning, he allocated huge sums of money to the Filiki Eteria (lit. Friendly Society). Moreover, Ali Pasha created ports and roads, drained swamps, opened mines, built countless bridges as well as dozens of public buildings.

His final moments were tragic, as he was assassinated and decapitated by the Turks here, in the monastic cells of Saint Pantaleon, on February 5, 1822. Ali Pasha of Tepelena, the Lion of Yannina, was praised in the works of prominent intellectuals of the 19th century, such as Lord Byron, Alexandre Dumas, Alphonse de Lamartine, Victor Hugo and Goethe.

There is regular transportation to and from the island from Ioannina. The boat departs near the castle next to Mavili Square.